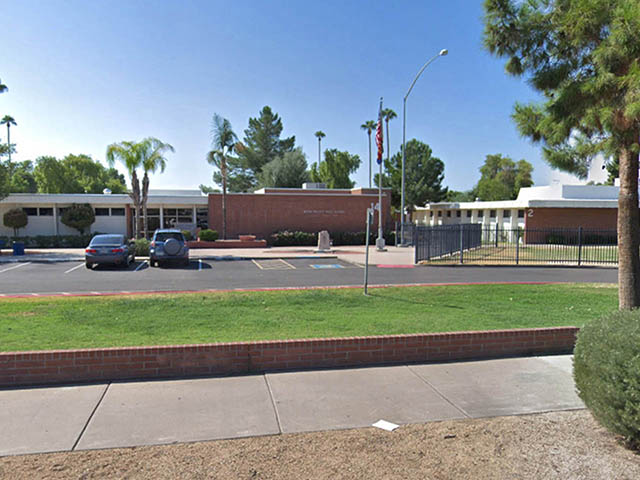 All of my friends from jr. high were going to attend nearby Moon Valley High School. For me to get a "variance" to go there instead of the school whose district I was in, there were only two options: Take Latin or join ROTC (Reserve Officer Training Corps).

...so I tucked my hair up under my hat and said imagine that! Yes sir! A couple other rock-n-roll guys and I became known as "The Goon Platoon." We always got demerits or extra duties for not cutting our hair or polishing our shoes enough. I would dread uniform day because I had to walk a mile and a half through the middle of town in those shoes. The "townies" and upper-classmen would drive by honking and yelling and occasionally throw something. I joined the rifle team where we would go to the local shooting range and compete in marksmanship. I also joined the drill-team whose job it was to raise and lower the school flags and stand at attention with drill rifles (balanced rifles that can't fire). One day, the Goon Platoon and I commandeered the supply hut with our drill rifles and demanded better shoes. Someone said we had the rifle team guns and we were suspended from school. I almost lost my variance but at least I got better shoes! This all happened in the shadow of the movie "Taps" which had just been released and was fairly popular, especially in those circles.

One of the selling points for switching schools was an alleged better drama program. Performing arts was the closest thing to filmmaking available at high schools in those days. At least it had some of the same attributes such as lighting, sound, script, dialogue, wardrobe, and sometimes even a few special effects. The "special" effects were usually lighting effects such as a strobe light or sometimes a fog machine that would be operated by the lighting department. I petitioned to join the lighting crew on the first big production and was selected along with five very cute girls chosen by the "macho" senior lighting lead. He taught us the basics of running the state-of-the-art computerized lighting board and how to wire and hang the lights. Shortly thereafter, he was expelled from school for sneaking into the boiler room with a couple girls and some beer. The play was in trouble because there was no one else to run the lights. It was a desperate time so I stepped-up and became the only freshman to run any crew, especially the largest, most complex, and arguably the most challenging crew. In addition, at only thirteen years old, I was the youngest kid at the school (by two months). My crew was all girls and some of them were even sophomores. I already had a somewhat reputation as a "ladies man" because of my sixteen year old girlfriend who was a junior. Anyway, this cinched it. Ultimately, I was the youngest official Thespian attending the school, ever.

On at least one occasion, I would get a call from someone with a stadium or amphitheater who was looking for a temp who knew how to operate that advanced computerized lighting console. One job was at the ASU Gammage Auditorium for a black-tie symphony. I accepted the Friday job on Thursday and told them I would need an assistant to help configure the presets between scenes. They agreed and said they would have someone there for me. They knew I was in high school and they expected a young person but I don't think they were quite prepared for a fourteen year old to show up. "I'm looking for John. I'm John, who are you? I'm Jack, your temp lighting director. You're what!?!" It was a classic moment. It got even better when he introduced me to my gorgeous college-girl assistant. The hits kept coming.

My freshman year of high school I had the first "Walkman" that had a cassette player AND stereo FM radio. I was that guy. Video game arcades were the new pool halls. All of the older kids would go there to hit on girls, smoke, and hang-out. I was the tag-along who was allowed to be there because I had an older brother with lots of older brother friends. For "upscale girls" we would troll the mall like little rats but there were dingy, smoky, arcades that were somewhat territorial or regional and more of our scene. A big thing was the music and jukebox selections they would have.